Rowley Park Speedway was built in 1948 by a group of disgruntled speedcar drivers from Kilburn Speedway, originally the speedway site was to be the home of South Australian Soccer but the ex brickpit was deemed to be unsuitable and so soccer moved to Hindmarsh Oval.
The speedway was originally shaped with four distinct corners and a small rectangular saftey fence.
Rowley Park opened on the 21st of December 1949 under the promotion of Wal Watson who was one of the Kilburn Speedway drivers.

In 1951 Watson sold the lease to former Sydney solo and speedcar driver Alf Shields, Shields ran the speedway up until 1954 when he sold the lease to a young Kim Bonython.
Bonython would go on to run Rowley Park for the next twenty years with great success.
In 1953 the track shape was changed to a more oval layout and a catch fence was added to the top of the original track fence, the track surface of shell grit and brick pipe clay was replaced with dolomite in 1953 through to 1955.
Further upgrades to the catch fence wer done in 1965 and this lasted lasted until the track closed in 1979.
During its heyday Rowley Park rivaled any speedway in Australia with crowds upwards of 15,000 attending, In 1965 it has been reported that a crowd of 20,000 packed into the venue to see Australia's first Demo Derby.
In around 1972  Bonython moved on and a group of former drivers took over the lease, Kevin Fischer, Cec Eichler, Rex Sandy and Ray Skipper, this would be for one season only 1973/1974, Thats when the Racing Drivers Association of South Australia took over.
The South Australian RDA would run Rowley Park from 1974 until it closed because of complaints from residents about noise and traffic problems.
Rowley Park Speedway closed on the 6th of April 1979.

Rowley Park was named after Mr Enoch Proctor (Ted) Rowley one of Australia's best known goalkeepers in the early days of Australian soccer.
Ted Rowley came to Australia from Staffordshire (England) in May of 1900, Landing in Albany WA Rowley worked as a clerk with the railways and in his spare time he served a seven year dental apprenticeship.
During his eight years in Kalgoorlie (where his yncle lived) he became almost a legendry figure in the soccer world being regarded as WA's best goalkeeper, He also played 1 game of of Aussie Rules kicking 10 goals but gave the game away and sticking with the round ball.
He came to Adelaide in 1908 a qualified dentist establishing a partnership in Victoria Square which in 1918 he took over when his partner died.

1950's - Bill Wigzell in a bit of trouble when a radiator hose bursts in his 22 car. Photo: Dean Donovan.

1950's - Harry Neale would later be killed in an accident at Claremont Speedway. Photo: Dean Donovan.

1955 - Allan Golding in the 12 car locked in battle with Murray Hoffman in the Tiger Kitten car as it was known. Photo: Dean Donovan. 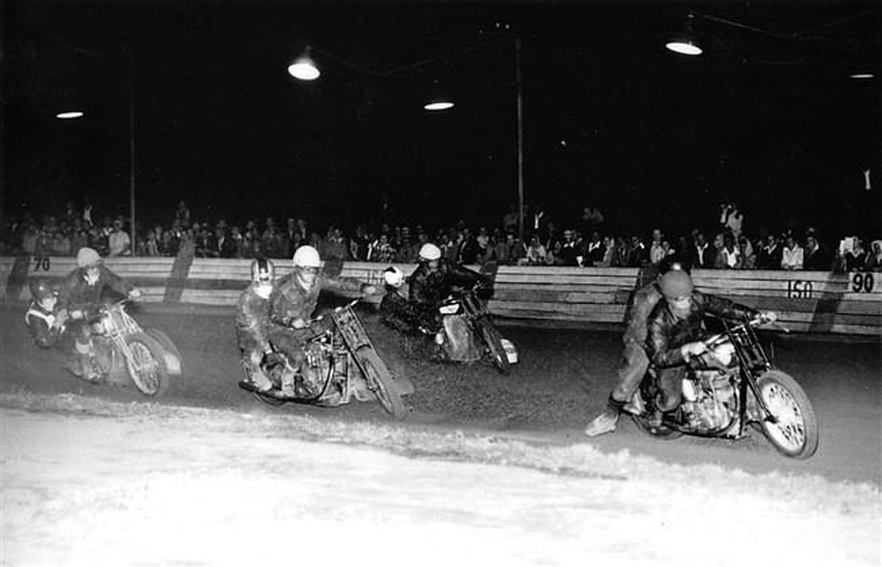 1959 - Arn Sunstrom sits in the picture perfect Repco Holden powered speedway that he raced, Arn would loose his life in an on track accident at Rowley Park on the 24th of January 1959. Photo: Dean Donovan.

1960's - Johnny Miller in the Ford powered car, under powered but gave the others a hurry up. Photo: Dean Donovan.

1961 - Clem Smith tears the fence apart and brings some of the lighting down. Photo: Dean Donovan.

1961 - G Bosisto in the 56 machine will take no further part in this race. Photo: Dean Donovan.

(use controls to pause - forward or reverse 4 images)

This car was the first of the "Sportsman" class to appear at Rowley Park, It was built by Graham McCubbin for Ray Skipper at the start of the 1963 1964 season, In the same year he had an accident with it at Portland and promptly sold it on the spot to RDA President Ron Wood, who ran it for a few meeting, before putting a young Zeke Agars in the seat.
In 1965 it was sold to Brian Jefferies who fitted an OHV Ford engine and became a Modified Stock car, to suit the new rules, It then passed to "Little John" Bermingham who raced it until it was replaced by an Agars style Supermodified.

(use controls to pause - forward or reverse 1 image)

(use controls to pause - forward or reverse 6 images)

(use controls to pause - forward or reverse 6 images)

1976 - Grenville tells the Rowley crowd how he won the ASCF Australian Championship, it was reported he drove a faultless race to take the win from a field of 72 entries.

1976 - Gary Reuter in his immaculately prepared number 95 ROH Torana, Gary finished 4th in both the South Australian and the Australian championships, the first local driver home.

Friday the 6th of April 1979 saw the final meeting in the history of this famous track, never again to be the home to the roar of engines, or the smell of burning methanol: The end of an era! as described by Stuart Telfer in the Meyers publication Sprintcar Spectacular 0f 1980.

(use controls to pause - forward or reverse 2 images)